In 1947, nine crescent moon-shaped objects were spotted flying thousands of miles per hour over Mount Rainier. In 1811, explorers discovered the first evidence of Sasquatch. Just last week, reports of multiple ghost sightings popped up in New York City. What do all of these have in common?

We first found the connection between these seemingly unrelated events just a few years back. Dates seem to line up. Locations seem to be specific. Something is connecting all of these events.

That's where you come in.

You, alongside a select group of experts, are now tasked with exploring and understanding these phenomena… And stop them if necessary.

The Weird is a collaborative Tabletop RPG project based on the "Powered By The Apocalypse" game system, players roll two six-sided die, and get to push the narrative forward depending on how well they roll.

Struggle with finding a consistent party? Want a game that is accessible to newcomers to TTRPGs?  Want a set of tools that will help you build interesting and engaging mysteries? Tired of games where combat and murder is the main objective? Then The Weird may be for you.

Here are some other aspects of The Weird that separate us from the rest:

LOW MAGIC
Enough said. Your job is to use your wits to solve the mystery... Not casting Eldritch Blast until the "mystery" is "solved."

EPISODIC FORMAT
The Weird gives you the tools to set up individual shorter stories (Episodes) that fit inside a much larger story (Seasons).

ADVANCED FACTIONS
Corrupt governments. Shadowy Cabals. Ancient Aliens. All of these factions have their own goals moving forward that can affect the game as it moves closer to the end of the season.

DEATH MATTERS
In The Weird, murder isn't your main tool to stop supernatural threats... In fact, it may actually impact your character's rolls moving forward...

GROUP LEVELING
Look at X-Files. By the end of the show, Gillian Anderson isn't shooting lasers out of her skull to defeat aliens from how powerful she has become. The Weird focuses on emotional arcs, as well as leveling that benefits the group as a whole.

YOU
The most important part of the game is you. The playbook is playtested by people like you who support the game and the podcast on our Patreon. The more people we have on Patreon, the quicker we can release the final version of the game! (You'll also get access to the other playable classes prior to the full release.)

So, are you ready to Join The Weird?

(Game is currently in Version 0.04. A development roadmap is located at the end of the book.)

Why do they call it oven when you of in the cold food of out hot eat the food?
by Yaboi_chipsahoy · 2 posts
167d
Post a new topicView all posts 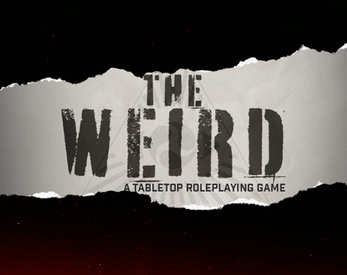